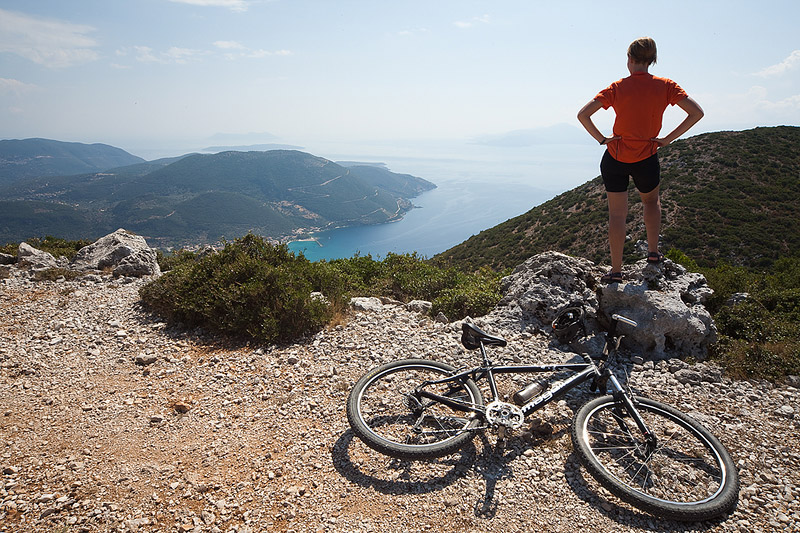 Since 2005, Greece for me has been the definition of the summer holiday. Cristal clear waters, blue skies, pinewoods and oregano scents, small beaches hidden between walls of rock. But the best thing about Greece is how mountain and sea usually combine. And what’s better the laying on the beach or taking a swim after a few hours of mountain biking. And so, the bikes came with us each time we went to Thassos, Sithonia, Kythira and this year, Lefkada. Take a look for yourselves:

I was born in Sibiu, near the Fagaras Mountains and for us going to the sea was always a long and rare expedition. I was always eagerly anticipating the summer holidays, waiting for that first dip in the big sea and especially the waves! We were going camping since we could not afford the hotel and we didn’t care about it anyways, we were there for the water, the sun and the sand. Going home was always melancholic, and I would sit on the back seat of our shabby Dacia, eyes closed, dreaming of the waves hitting the sand over and over again. It would take me days to wake up from my obsessive seaside reverie.

When I grew up I started going to Vama Veche and 2 Mai, in a time when there was really nothing there. Then we switched to Gura Portitei, Corbu and Vadu. All pretty places but that childhood fascination was gone. I first went to Greece in 2005 and ever since, the Romanian sea side became less and less interesting. Maybe I’m privileged, my in-laws live near the sea side, in Constanta. We go there a few weekends a year, in extra and high season alike, and that is all we need.

Each Greek holiday involves some serious planning – Internet research, Google Earth / Panoramio, forums. We usually look for places which are not so much in the mass tourism circuit, where you can find mountain biking opportunities, as well as loads of pretty isolated beaches. We rent directly from the owner and chose to drive there, so that we can take our bikes and also have freedom of movement. We’ve spent holidays in the Northern Aegean (Thassos, Sithonia), Southern Peloponnese (Kythira) and even in the Cyclades (Milos, but without the bikes). This year, we went to Lefkada, in the Ionian archipelago.

We drove 1300 km in 20 hours. We were rained on constantly in mainland Greece, where our route took us on a very impressive motorway, called Egnatia Odos, which connects the Turkish border with the Western coast of Greece, passing by Thessaloniki and through several mountainous regions. In comparison, our pains of birthing a motorway on Valea Prahovei or Valea Oltului seem utterly ridiculous.

All that rain on our way to Lefkada meant that when we finally got there, we enjoyed seven days of perfect weather – sunny, but not too hot. We usually avoid Greece from June to August because of the high temperatures which make biking close to impossible. September however is ideal. Even if the days are shorter, the temperatures are kinder, and so you can be out of the shade for most of the day.

Each day was planned so that it would start with a bike ride, which would take us to the beach where we would meet the rest of the troupe (my parents and daughter), and then back on the bikes to the guesthouse.

Our target was Kathisma beach, on the West coast of Lefkada: 21 km, 700m elevation. We then returned on a longer route, 31 km and 800m elevation. The island is small but steep, and most of the roads are paved, much more then in other place we visited in Greece.

We mustered up the courage for a longer ride: a round trip of 70 km, 2000m elevation. We even got a good chunk of dirt road, as you can see in the video below. It was very dry and rocky and we kept thinking we would cut the tires. If you escape the snake bite, you are sure to get into some thorns. The guys from Israel that I had taken on a tour in Romania this summer told me that they always use this gels in their tires, to prevent a flat tire, which is very likely to happen on really dry terrain spotted with thorny bushes, quite similar to the vegetation in Greece.

The beach of the day was called Aghiofili, near the very large Vassiliki bay, which was full of wind surfers. Our beach was small and pretty, isolated from heavy winds or waves, but quite popular. It is probably very crowded during high season.

The girls did not accompany us on the way back, saving their strength for the next day. Our route back took us up to 800m – it doesn’t seem like a lot, but it is when you consider that you depart from the sea level. Lots of climbing, as well as descent. I played with my camera on the way down, improvising a system to bind it on my chest. The results were quite interesting.

Porto Katsiki, one of the most famous beaches in Greece. We had to see it for ourselves. On the bikes, of course. We first drove to Vassiliki from where our ride started. To get to Porto Katsiki you need to climb from the sea level to a 600m ridge and then go down on the other side of the island. We started on asphalt which later turned into dirt road and finished in asphalt again.

The beach is indeed spectacular, as you can see from the photos and video: a huge wall abruptly descends into the blue waters, leaving but a strand of sand for the tourists. The constant waves account for the fine sandy beach, but we got a quieter day. On the way back we descended to the most Southern tip of the island, near the lighthouse and the temple of Apollo. We got back to Vassiliki on our bikes. Nearly 50 km, and 1,800m elevation.

Every Greek island we visited had a road that reached its highest top. In Lefkada this road was paved with asphalt! OK, it did not reach the very top, but a neighboring peak, 30 m smaller. We got there during our last day on the island. Nearly 50 km, and 1,700m elevation. However, it was the easiest ride of the week, because not only it was on asphalt but the inclination was fairly mellow too.

On the way up, one of our girls saw a wild almond tree on the side of the road, and so before we left for home, we went almond picking. We gathered quite the crop, just enough to enjoy over a glass of wine with friends and family. Lefkada was great, now we just have to find our next summer destination.