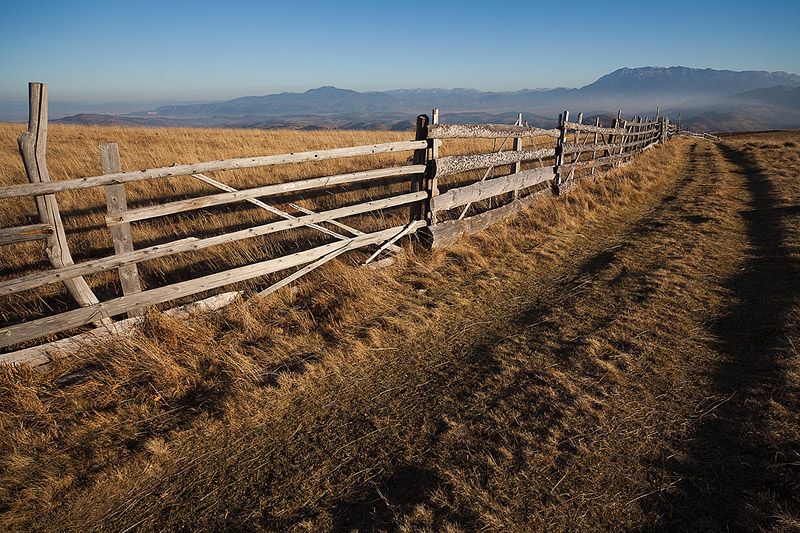 This autumn, the weather we were expecting in October came in November. It’s been weeks now since it hasn’t rained in Brasov, the sky is almost always clear and we are enjoying mild temperatures, even early in the morning. Just the perfect excuse the give the bikes one more try, before the weather eventually turns sour and we start thinking about winter sports. We opted for a tour around Poiana Marului, a place we just recently visited, and another tour under the western wall of the Bucegi Mountains, around Poiana Gutanu. The tracks were drier then anything we’ve encountered during the summer, and the visibility faultless.

So, on Sunday we were at Poiana Marului. We were too lazy to complete the entire ride, which provided the perfect occasion to try new trails. The area is very beautiful and quite lively. Unlike the hills around Simon or Moeciu where you only find hay stacks and livestock shelters, mostly deserted, here there are many busy households. It is somewhat similar to the Pestera – Magura region underneath Piatra Craiului, with the one difference that in Pestera and Magura the houses are arranged in clusters and most of them are in fact guesthouses. In Poiana Marului the houses are much farther apart, which means there are cart trails in between them and the yards are not fenced in or clearly marked. And so the respective dogs roam around freely, are quite vocal in protecting their territory, and you can find at least two per house. The most fierce of them are tied up during the day, or so we were told, and only let out at night – so beware should you want to ride under the moon light. The highest point of the ride, in altitude and beauty alike, is a place called Barsa Fierului. The climb is long and intense (from 660m to 1200m in less then 6 km), but the view is most definitely worth the while. Unfortunately this is also a route favored by motorcyclists, we’ve met at least 10 of them in three separate groups, and not only are they very noisy, but they also make the dogs extremely nervous.

From Barsa Fierului we followed the main ridge south east till after some GSM antennas. On its right, the Barsa Fiersului valley rolls downs towards Piatra Craiului, while on its left you can admire the Persani Mountains, with their bare crests one on top of the other till they reach Magura Codlei. The sunlight comes in slanting from the tops of the Iezer Papusa Mountains, covering the landscape in a mellow golden light, just like honey. Dreamlike.

The day before, on Saturday, we were poking at the Bucegi from underneath their western wall. We climbed to Poiana Gutanu and then descended to Simon on a trail that required certain technical abilities if you wanted to enjoy yourself. There isn’t much to add, just that I’ve filmed, edited and put some music on top (“Waiting for Nothing”, by Moonlit Saylor, if you’re curious) and here are the results: