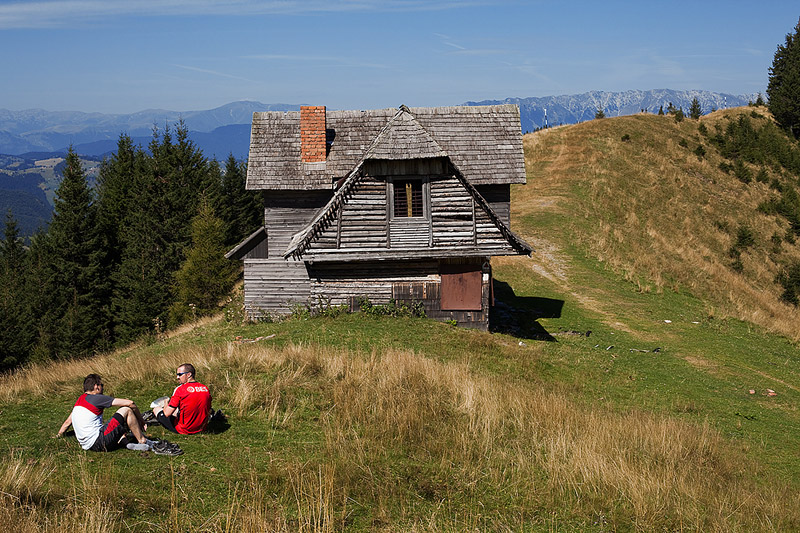 During a weekend when everyone was focusing on the Sibiu marathon, I went mountain biking on the Simon hills, near Bran. My touring partners: Steve and Robbie – who, after fours years of living and cycling in Romania, decided to take things one step further in the difficulty department. So, from taking the cable car up the mountain in Sinaia, they were now dealing with the ups and downs of Poiana Gutanu, underneath the Bucegi Mountains, and the ridge situated on the south east of Simon.

During our trip we met several groups of tourists, as well as farmers gathering the hey, who offered to trade in their scythe for a bike. We replied that we’re not very good at riding down the hill on scythes and would much rather stick to our two wheels. Which soon proved even more useful when we came across a big herd of cows, lead by a strong and impressive looking bull, who was stuck in the middle of the trail, seeming determined not to let us through. So, we carefully went around him, as calmly as possible, but afterwards, the adrenaline was pushing us down quicker then gravity.

We had amazing weather, as you can see from the photos and video. Maybe a little too warm, though. The ground was really dry and I kept thinking it could use a little rain. My wish unfortunately came true: first in the evening, then during the night, and the next morning too… And so, our ride for the second day of the trip, around Piatra Mare, got cancelled. We are planning to make up for this sometime in October. Robbie and Steve really enjoyed the experience, even if physically and technical it was more challenging then expected. The ride was short but intense: 40 km long, with over 1000 m elevation – out of which 300 were downhill, from Poiana Gutanu to the lower end of Simon.