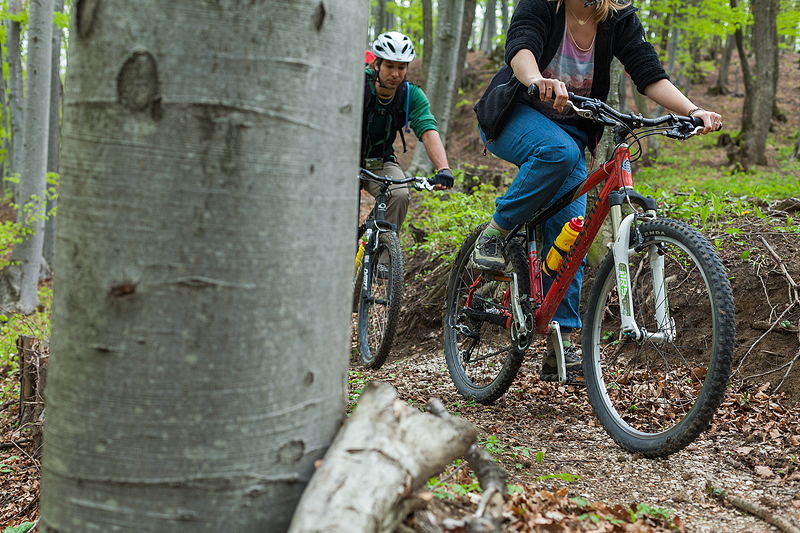 The blessing of being a mountain biker living in the city of Brașov comes with a price. Mind you, it’s a small one. With so many options of single trail riding in the neighbouring mountains (Postăvaru, Bucegi, Piatra Mare, Piatra Craiului, etc.) you don’t get too many incentives to travel further way looking for new mountain biking territories.

Fortunately we still do that – you can read on this site stories about our mountain biking experiences in some Greek islands, on the Bulgarian seaside, but also in Romania, around Sibiu and near Sighișoara, in the middle of Transylvania. 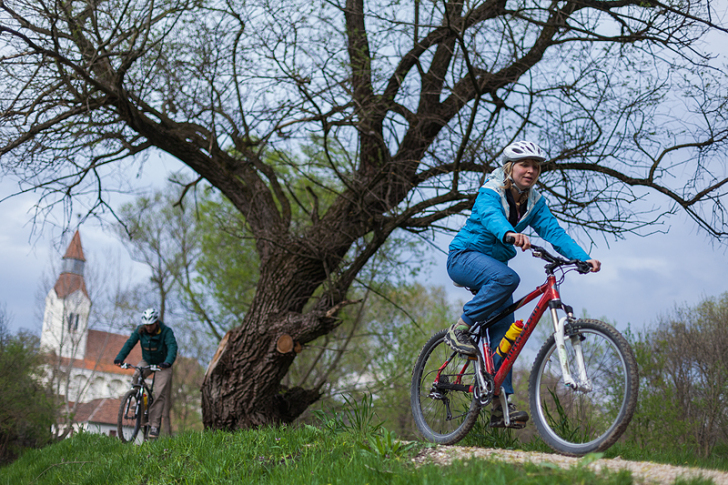 This spring we had the opportunity to do some more riding in the Viscri area, namely on the mountain biking trails build by Adept Foundation linking the villages Criț, Bunești and Meșendorf. Our guests where Eileen and Yves, two young Swiss we knew from last summer, when we spent ten days hiking up in Bucegi and Făgăraș mountains. 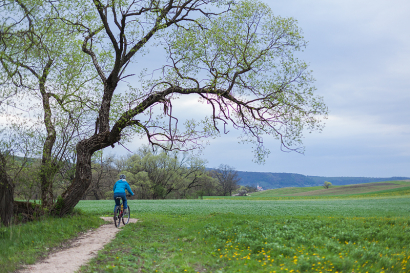 There are two built-from-scratch biking trails. The longer and older one (opened in 2011) has about 8km and connects the village of Criț with the village of Meșendorf. The second one is newer and shorter. About 4.5 km, following the rivulet Scroafa that flows through both villages. This shorter trail is rather easy, without long uphills or downhills but its many turns and short slopes will make you push the pedals and enjoy the ride. The surface is just a little bit loose because of the pebbles, nothing to worry about and really handy in rainy weather, it really keeps the mud out of the way. And boy the mud is sticky in that area. Yves but especially Eileen were quite new at the game of mountain biking, but they were better and better each time we rode the Criț – Bunești trail, and we did that about four times during one single day. That gives you an idea about how inviting the riding is, no matter what your technical or physical level is.

In the village of Bunești the trail starts near the bridge over Scroafa rivulet, on the secondary road that goes from Bunești towards Viscri (follow the sign that points to Viscri at the national road). In Criț the trail ends at the end of the village in the direction of Meșendorf. The other trail, the longer one, starts on the other side of the road – they are literaly connected, you can link both of them in one single ride with only one road to cross. This second, longer, older section (opened in 2011) is quite visible on Google Earth satellite imagery and less so in real life. Fresh grass is gradually swallowing the pebbles trail, and I suspect in summer time it gets worse with a taller and thicker grass. However, it’s not rocket science to identify the trail. Following it up the hill side is a different matter, you’ll need a good pair of legs and some climbing experience and technique to finish the climb in one go. A lighter bike will be helpful, but relax – the ascent is not long, less than a km distance and no more than 100m dislevel, before reaching the higher section with milder slope and great panoramic view. 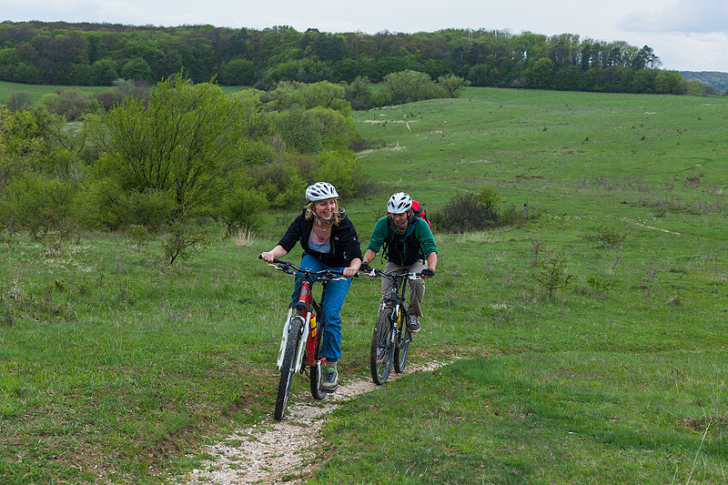 Soon you’ll reach the forest, beech and oak trees, where the trail is covered with dead leaves and it meets plenty of old forestry and cart roads, but again there’s no real danger of loosing the biking trail at that point if you managed to read its patterns (constant width, curve radius, etc). As in any living forest you’ll meet dead branches in the middle of the trail, don’t be shy and clear away the path for the next biker’s benefit. 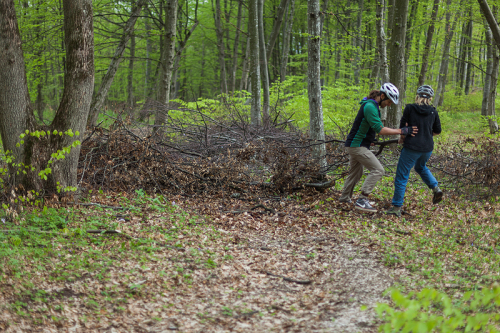 Sometimes a bigger cleaning effort is required. We found a place where some debris from a forestry work session was completely hiding the trail for about ten meters. I suggested a brake so I can try and clean up the place, but Eileen and Yves were quick in lending me a hand. Ten minutes later the job was done, the path cleared of debris and the three of us proud of our work. But there’s no good deed that stays unpunished: Yves lost his pant leg cuff in the process. I guess the next one will be bright red and not muddy brown.

At the highest point of the trail, in the middle of the forest, there is an information point with photos and texts describing birds, insects and other creatures leaving in the area. The place was build using wood and branches from the surrounding forest, it looks like it will soon need some maintenance work but that’s no reason not to have a nice break there.

From this point on it’s downhill to the village of Meșendorf. The first part is in the forest, on a nicely carved trail along a steeper section and with some wooden protective fences, than you’ll have a nice flowing sequence of u turns leading you to an orchard above the village and than, along an old barn, finally the village road. You are in the West most point, and you’ll be happy to notice a local shop nearby with tables and umbrellas. They told me they are making fresh pizza in summer time and I plan to verify that with my own eyes (and mouth) later in the season. The oven was surely working, there were piles of „cozonaci” made for the villagers as Easter was just a few days later. We were lucky enough to get one, eating it as our lunch break – delicious.

After visiting the fortified church in Meșendorf (ask around for guy with the key) we did the trail the other way around. It’s easier, less climbing and easier slopes, I guess in summer time the difference is even bigger as most of the ascent will be in the shade. 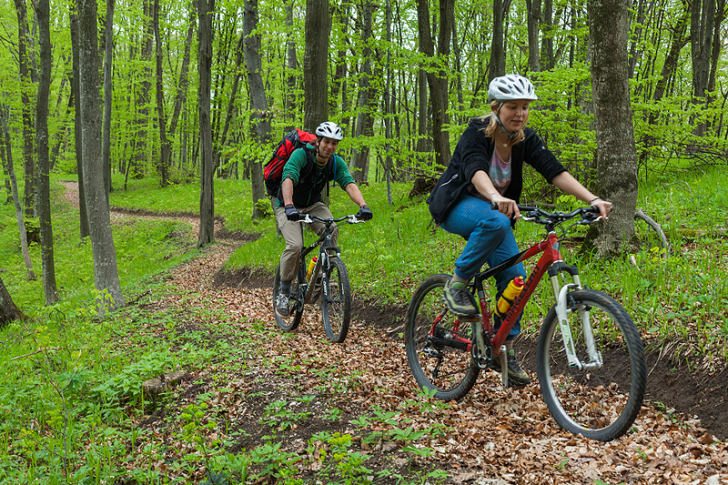 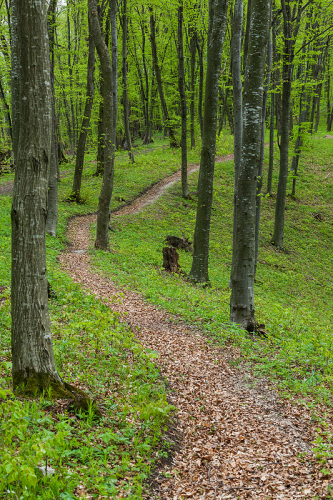 I think spring is the best time to bike in the area. There’s a pebbles base on the trails that keeps the mud at bay. And it should, the Transylvanian hills are full of clay. There’s no coincidence that the Mediaș Medieval Marathon was nicknamed Mediaș Mudieval Marathon after a few years of bad weather during the competition. Apart from that, spring brings the most incredible fresh green, a feast for tired eyes of stern winter. The temperatures are ideal, not too cold and not too warm, the biting bugs aren’t yet alert.

Yes, it’s about mosquitoes, they will be especially attracted by the salty perspiration on your arms and legs and you can either go faster or use long sleeved clothing, kind of annoying when it’s warm outside. But not just mosquitoes. There’s plenty of deer in the forests, also sheep and cows in the open fields, so ticks will be a concern, especially late spring and early summer. Avoid laying on the grass, keep your helmet somewhere up when it’s not on your head, do a good check-up when showering at the end of the day and you’ll be fine.

Shepherd dogs could be a concern if you have a problem with dogs, but I found the shepherds in the area quite friendly and willing to master their dogs. Anyway, the key is not to be afraid – humans are bigger animals than dogs and the dogs know that. Don’t run, talk to them, whistle, make them understand you are the same kind of creature as their master. It’s sounds easier than it actually is, but once you start mastering the technique you’ll be amazed how effective it is.

After spring, next choice would be late autumn, when the color of the leaves went bunkers and the day is still long. No biting insects, no torrid weather – the only problem is that mountains are also beautiful at that time and you’d want another ride up on the trails before winter is coming… when you might get another chance of riding here. I suspect a hard, frozen trail would be quit a treat for the more astute mountain biker, equipped with the right clothing and the right tires.

There are currently about 13.5 km of man made trails in the area, another section connecting Meșendorf and Viscri is supposed to be under construction. The plan is to have a network of 100km of trails that would take the biker all the way to Sighișoara. That’s a lot of trail work, and that translates to money. Not just building the trails, but also the maintenance work. A voluntary SMS pay scheme I think would be a good way for financing the project, the same way one can pay for the parking in certain cities.

I will definitely come back in the area, to test the pizza made in Meșendorf at the end of a trail riding session with my daughter, my wife and our friends. Really looking forward to it!