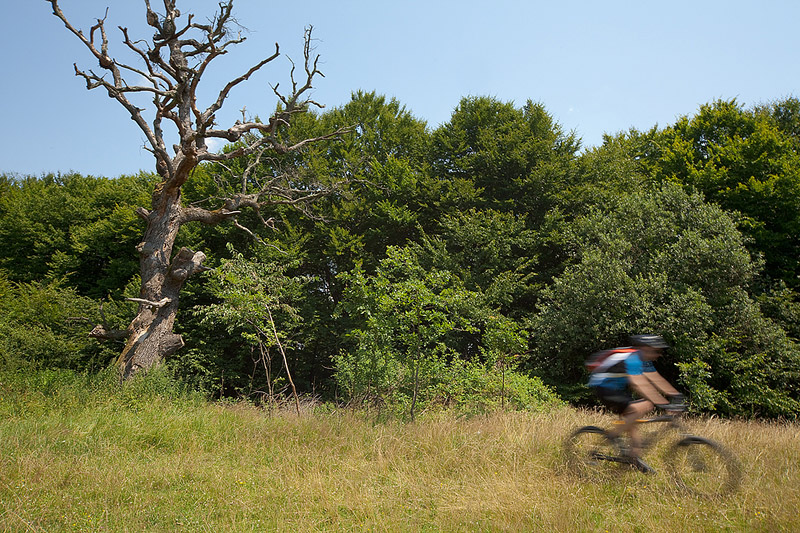 Finally, summer is here! After a rainy and very cold June, the sun eventually came out, and the weather warmed up. And so, during the first true summer weekend of this year, we went to Sighisoara for a family reunion. As always, the bikes came along for the fun. 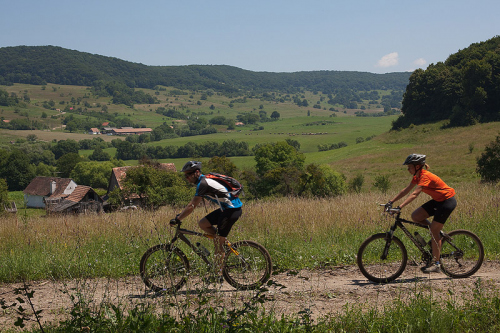 Which meant that while the rest of our family was suffering from the heat, we took in the breeze on our bikes, around the Saxon villages and citadels of Sighisoara. On Saturday, we went on a 30 km ride that started on asphalt from Sighisoara to Apold, and then continued on dirt roads from Apold back to Sighisoara on the Aurel Vlaicu Valley. It was a short, easy and neat little ride. Through the villages, the people were saying hi to us in English, proof that they are used to foreign cyclists around those parts. Through the woods we got to see a cute and shy deer. The most technical part of the track was in fact in Sighisoara, on the way back, when we got to try our climbing skills on some short and steeps streets.

On Sunday we woke up still feeling stuffed from the barbecue of the previous evening, and we decided to take it easier. We took the bikes to the Breite Natural Park (Breite is a hill above Sighisoara, and it became an area of special protection because of the centuries old oak trees that are scattered on its plateau – see www.rezervatia-breite.ro for more details). We could have gotten to Breite by taking a detour on the national road, followed by access through the dirt road, but we opted for a 20 min session of push bike on a trail that started in Sighisoara and ended directly on the plateau. If you’re up to it, you could climb the trail on the bike.

The said trail got us to the place in the plateau where the car access is limited by a barrier. This was really the only populated place in the reservation, were people were barbecuing and dozing off on the grass. After the barrier, we hardly came across anyone and we pedaled for about 4 km to the end of the park. The place is eerily beautiful. On the information boards, they say that the drainage system built in the eighties changed the ecosystem. There used to be a marsh area that the oak really liked. Once the water started to disappear, the oak got taken over by hornbeam. The drains have not been blocked, the hornbeam controlled. 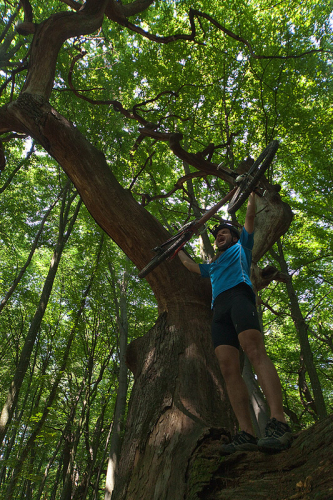 We took a long break in an area of the park called “The Oak Cemetery”, which lies in the beech wood on the south of the reservation. We climbed the dead but still standing oak trunks and took pictures. Their big branches still somehow seem alive surrounded by the beech foliage and you’d think they’d stay like that forever, as sculptures, if not for the scattered and hollow oak lying on the floor of the forest.

On the plateau, the oak seem the fare much better. There are a few of them leafless, dry, contorted in the heat struck sky. But most of them are alive and impressive with their massive crowns that could easily shelter an entire flock of sheep, complete with the ever present sheep dog, allergic as always to anything on two wheels.

After the final break, which we took to see a 700 year old, 7m in circumference oak, we headed back to Sighisoara. Before taking the same trail down (some on the bikes, others not), we played in the woods and tried some technical bike exercises. We got home just in time for the final feast. On our way back from Sighisoara to Brasov we encountered cars with bikes on top, most likely returning from the Azuga mountainbiking marathon. This photo here on the left is dedicated to them.

Since Sighisoara is a traditional place for our family reunions, we are sure to come back with the bikes. From Breite, you get to the Crint citadel, and even Biertan. Or to the east, to the Saschiz citadel. Or to the south, to Apold, then Mesendorf and Viscri. Lots to do!