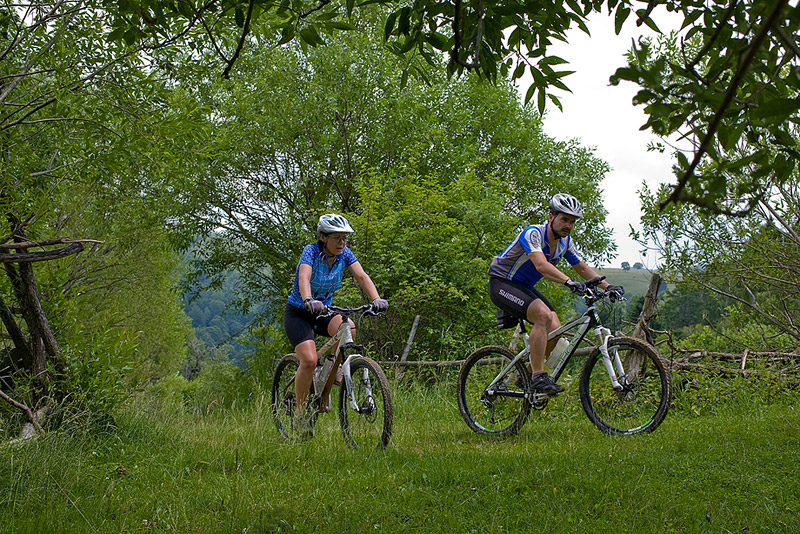 2022 Calendar
"Looks amazing. WIsh I'd been there, but I probably would've dropped dead with fatigue. Keep it up"

The old cart road from Sibiel to Crinţ used to be invaded by sand or tall grass – that’s how we discovered it four-five years ago, when we started cycling in the Mărginimea Sibiului area. Things look different this year, though. The old road was upgraded to a wider, more accesible dirt road. Most proably because of the forestry works being done in the area, as Crinţ looks as deserted as ever. The military station looks abandondend ages ago, the big farm/pension flanking the road for a few good hundreds of meters seems to accommodate nothing more than a handful of dogs, cows and horses. They must enjoy life up there, with state of the art solar panel system, brand new tennis court and a two stores wooden building that, despite looking brand new, seems as populated as the military shacks in the vicinity.

Cycling up to Crinţ from Sibiel is easier now, but also more boring. If you are looking for something more tricky you need to continue up towards Creasta Porumbelului. At least that’s what we did, continuing last summer’s explorations..

We opened then two new access routes to Crinţ coming from the village of Tilişca – both as beautiful as challenging. This time we wanted to see how these routes can be connected directly to Creasta Porumbelului and we were delighted with what we’ve found. Creasta Porumbelului gives you wide views towards the Cindrel Mountains and the Dobra valley on one side and over the hills of Mărginimea Sibiului (home of the famous cheese producers) – you literary feel like riding on the back of a dove (some panoramic views available here). The moment you turn North from Creasta Porumbelului you enter a world of small wonders: short, intensive climbs and descents through miniature valleys and seasonal streams, forest groves and small grass side hills. We only saw some sheep and dogs in the distance, nothing but a few motocross tracks to remind us about civilization in the middle of nowhere.

The descent from here to Tilişca follows a long hill crest along isolated houses (some of them with visible signs of present day human activity) with a final steep section where you have a good opportunity to put some order in your thoughts while bashing your brains inside your skull trying to stay on the bike on the loose and rocky surface. It’s amazing how the bike components resist this kind of (regular) abuse. This goes for the brains, also.

As my three tour companions (Mihai, Christi and Mihai de Mediaş) were unsatisfied with the length of the ride so far – they are about the run in some mtb marathons this summer – we decided to climb back another 600 meters to Crinţ using one of the routes we opened last summer. The final descent was fast (but not very furious) on a big and wide forestry road to Sibiel that was also marked by the forestry heavy trailers.

In the end there were almost 80 kilometers with about 2500 dis level, good training for a mtb marathon. For me also, as I decided to participate in the Mediaş Medieval Marathon on the 11th of June this year. Who knows, maybe in the future we’ll go to a mountainbiking marathon in Mărginimea Sibiului. The trails are very suitable for such a competition, far away from the crowded roads, with plenty of accommodation in the area. We would be riding on home soil :-).

Here is a short video filmed during this tour:

Looks amazing. WIsh I’d been there, but I probably would’ve dropped dead with fatigue. Keep it up