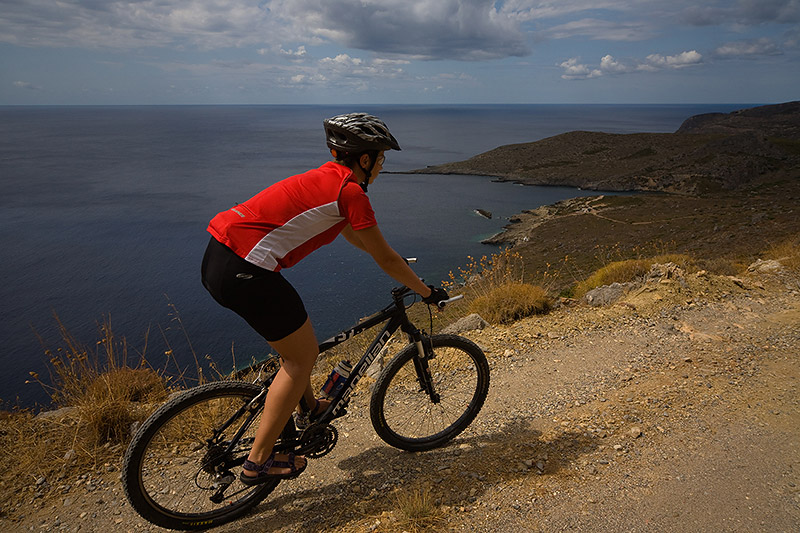 A new episode in our Greek series. This time about mountain biking in the island of Kythira, South of Peloponnese, a place we visited back in 2009. As usual it was in September, June-July-August is to be avoided anywhere in Greece if you plan to go out and about, away from the beach umbrellas or the air conditioned hotel facilities.

Ok, so it’s Greece again. With our bikes on the roof top of the car – big surprise. We’ve already been to Chalkidiki, in some Aegean islands (Thassos with bikes, Milos without) so we decided to go further away, to change the air and the sea. Kythira island, South of Peloponnese, came as a very suitable choice: plenty of mountainous landscape with myriads of tarmac and dirt roads, an abundance of secluded small gulfs with gorgeous sunbathing, swimming and snorkeling prospects. Also a good offer of notable places to visit on the way there and back – it’s a good long way to go to the far end of Peloponnese.

We stopped on the way to see Mystras and Monemvasia, two of the iconic byzantine places in Greece, we enjoyed epic views on the coastal highway along the Corinthian Gulf and through Arcadia in central Peloponnese. Spring would be an even better time to visit the area, with all the trees and flowers blooming. On our way back from Kythira we visited the Ancient Olympia, where the Olympic Games started a few thousands of years ago.

Most likely Kythira was the least touristic island we’ve seen so far in Greece. And we’ve always tried to choose our destinations in order to avoid the hoards of tourists flooding all the summer the beaches and the bars in places like Crete, Rhodes, Corfu, etc. We rented an old, traditional, but nicely renovated house in a half-deserted village in the middle of the Kythira. About 300m altitude, a strategical starting point for explorations on mountain bikes or by car, trying to locate the scenic roads and the gorgeous beaches highlighted during our documentation phase back home (big thanks to Google Earth and Panoramio photos). And what we’ve found was, as usual, even better than what we expected. See some of the photos and judge for yourself.

We fully recommend Kythira for all those seeking a different Greece than the one you get on most tourism agencies offers.