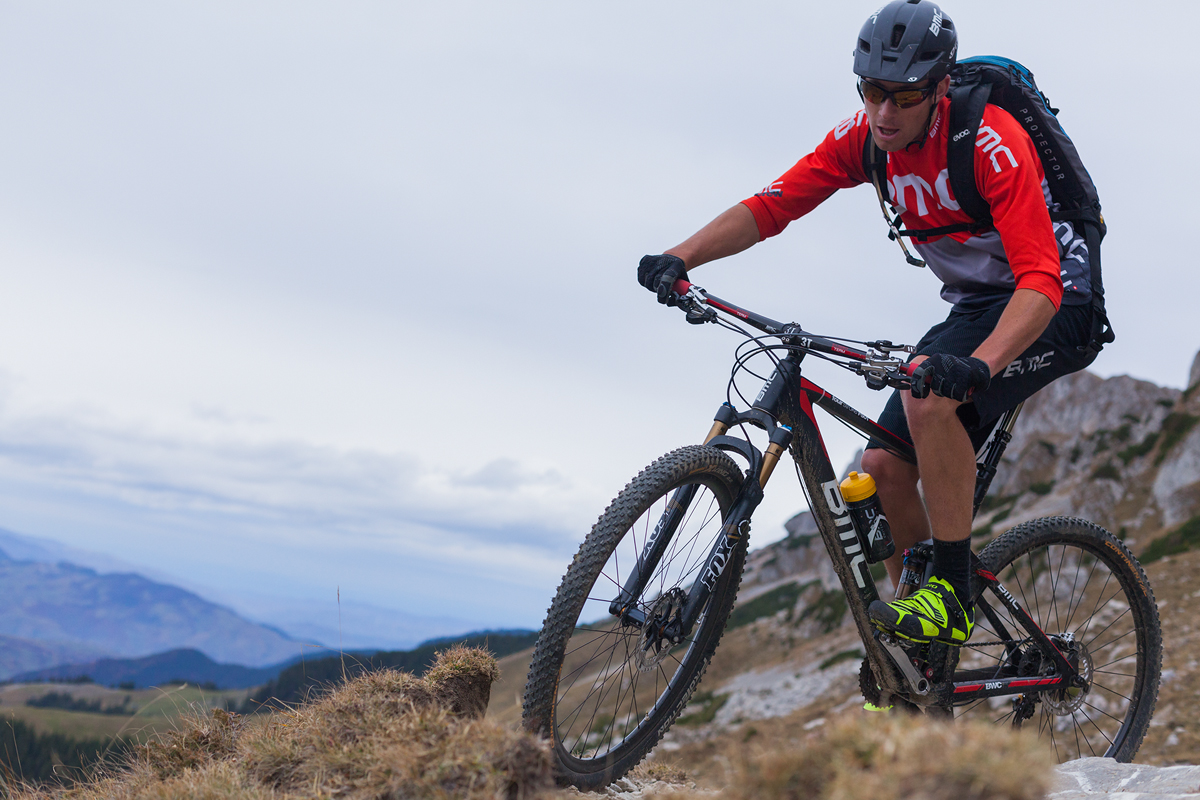 Santa came early this year for mtbtours.ro. It was mid-October when we had the joy and the privilege to organize a tour for a select group of French bikers. A fair deal: I showed them the wonderful trails around Brașov, they showed me what one can do with a bike. All in all a cross-country, all-mountain and enduro experience in the very pleasant company of five joyful mountain bikers.

I saw what Pierre Geo Plantet was able to do during some XC competition during the summer, when he finished second as a guest participant at the Romanian National MTB XC Championship. François Bailly-Maitre was introduced as an “enduro world class specialist”, and so it proved to be :-). Edouard and François were lacking the competitive pedigree, but there was no shortage of biking skills about them. Last but not least, Morvane was the least experienced mountain biker, having only three years of history under her belt, but she was a brave and resilient competitor in the group.

We started full power form the first day, with 60km, 2000m uphill and 2600m dowhnill on the Postăvaru trails in the outskirts of Brașov city. Yeah, we cheated a little bit and took the cable car to enjoy one of the most famous mtb single trails in Romania. Next day we moved to Bucegi mountains, going up to the Strunga Pass, with a warm-up ride on the hills near the Bran Castle. The uphill to Strunga Pass is a tough nut to crack, we included it in a couple of advanced tours this year, but this time I saw with my own eyes that it is 100% doable on bike. I repeat. 100% on bike. From Strunga Pass to Padina Hut there’s a 300m drop nice single trail, but probably too easy for “les boys”, who were looking sideways for freeride lines. Party time!

Unfortunately the cold, the wind and the snow up the mountains forced us to cancel the day on the Bucegi plateau, but there were plenty of trails to compensate with. First the uphill from the previous day turned into a magic descent towards the village of Șimon, with a 8km loop in the vicinity of Moeciu de Sus. We ended the day enjoying a pint of beer, a glass of good local wine (some pretty good Romanian dry red at ridiculously small prices) along the delicious traditional food prepared by our favorite host in the Bran Country, Madam Minerva.

The last day was dedicated to the Piatra Craiului National Park. The impressive Zărnești Gorges, the long single trail descent to Brusturet, the epic ascent to Curmătura and the equally thrilling descent to Botorog crowned up another marathon-like day of biking, with 60+km and more than 2000m dis-level. The boys ended the day and the tour in style, pedaling while sitting backwards on the saddle, wheeling while going up the road or sprinting at 50km/h on the main road near Bran Castle. The joy of biking.

I was fantasizing about this tour for the last two years, that’s when we first discussed the idea with Pierre. Him and François BM(C) are always struggling with a tight schedule, so it was hard to find the time to come to Romania. Finally they managed it, and it ended up as a rather short but very intense mtb tour. Merci and allez les bleus!