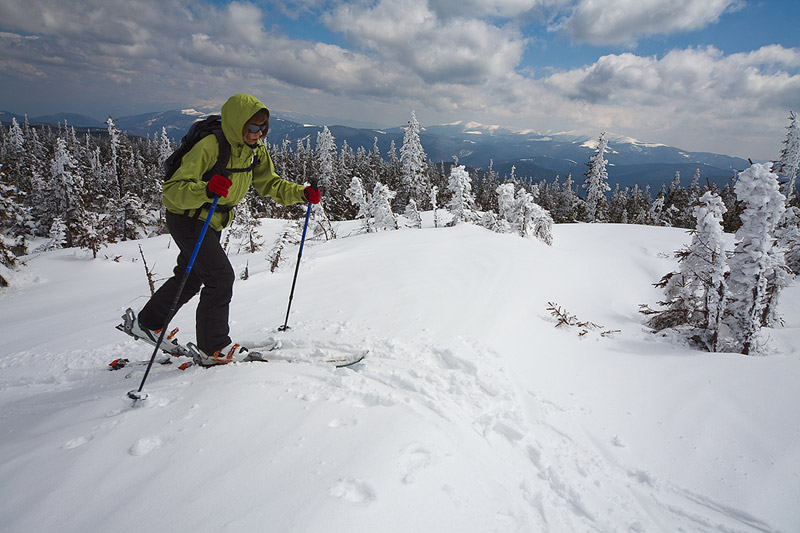 Snow was scarce this winter. Some did fall, but not enough. We only got a few days of good skiing in Poiana Brasov in March. That was it. Then, spring came, and with it the snow. Lots of it, but not the lasting kind… Before it melted all away, we got to enjoy a nice ski touring weekend in Cindrel, which is a massive situated above the winter resort of Paltinis, in Sibiu County.

Many people say that ski touring is the winter equivalent of mountain biking – some believe it is quite the opposite, that biking during the summers in the mountains lets you see how the area you want to try in winter on skis looks like. They are all right. Still, while you can bike pretty much for three seasons straight every year, the skis are only good for three or four months a year tops, during a proper winter.

This year was the first time I tried ski touring and each and every experience meant some serious pain. At my first attempt I got some nasty bruises on my feet on account of the ski boots. The second time around, the bruises quickly turned into wounds, plus a stretched tendon. The third time I ignored the pre warm up and that stretched tendon started to act up really badly so I had to turn back. Finally, our forth tour, in Cindrel, I bandaged my feet, I put on two pairs of socks and the tendon was healed. What could go wrong, right? Well, I forgot to put on sun screen. So I acquired some serious burns on my face, especially the nose. It’s all better now, but I still have the ski goggle traces on my face. I could be worse, Horia got a hat shaped tan! Oh, and how could I forget, I twisted my ankle during a fall I took going down right under the top. This one is still hurting…

But, despite all the suffering, it was well worth it. Going up is a constant and intense effort, especially for me (I’m lazy, and lack strength). On Saturday it was really foggy and we had to turn back (we realized the next day that we were in fact quite close to the top, but we really couldn’t see much anymore). The snow however was light and fluffy, almost powder. On Sunday the sun, my enemy, came out, which in turn made the snow wet and heavy. Still, great skiing.

So far I have to admit I prefer ski touring to mountain biking, especially when the snow and inclination are to my taste. When it comes to mountain biking, I’d rather deal with a serious and technical climb, then with the fear of descent. But at ski touring, the descents were bliss! With a little bit of luck and planning we might get another ski weekend in Bucegi or Fagaras, before mountain biking season really starts.