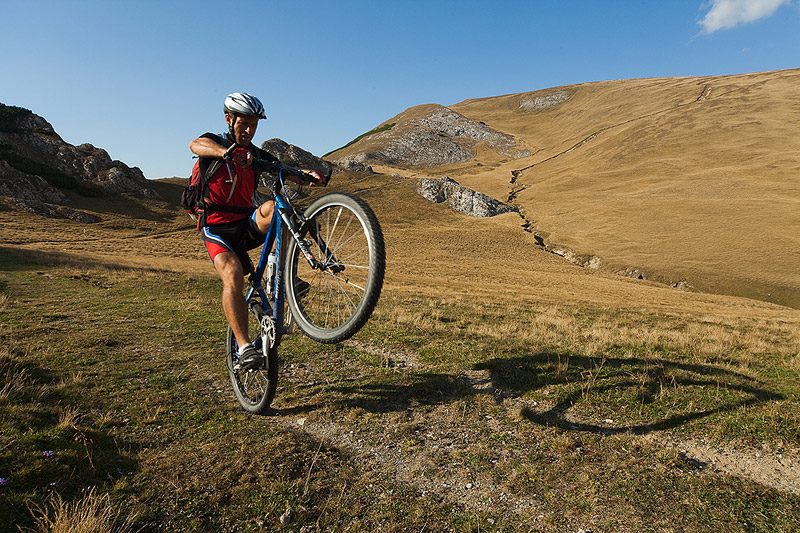 Bucegi Plateau, Omu Peak, Drumul Granicerilor, Padina, Strunga Ridge and then a descent to Simon. For a long time I have been planning this trip and I had lost all hope of doing it this year, since we had a mostly cold and rainy summer. But the weather was on our side this time, and a good thing that was too.

The first ever story we published more then a year ago on this blog was also about a ride through Bucegi. That time we started the ride in Sinaia, through Dichiului Ridge and stopped at Babele. This time however, we had different plans: we wanted to be rested when we reached Babele, so we could enjoy what came after that, towards Omu Peak, and then onto the ridge through to Strunga. It was a great ride with beautiful weather, which you can tell by looking at the photos and video below.

Together with my friend Mihai, who took his old battered bike out one more time before it was replaced with a younger and lighter model, we took the cable car from Sinaia to the 2,000m mark (and you can boo us for that, but what can we do…). The cable car first ride is at 8.30, so we were able to sleep in a little. It cost us 50 RON each to take the bikes up as well.

From 2,000m, the ascent to Babele starts with a really difficult descent, passing the Miorita Hut, till your reach the road the passes by Furnica on the east. Then onto Piatra Arsa, where we passed by the running track and entered a road flanked by juniper trees where he had to give way to a car (yes, you can still find them here). The path to Babele is fairly easy, with the exception of a few places where the ground has fallen on account of the rain, but which are great for trying your technical skills. We had to go see the Sphinx and were surprised to find so many tourists taking its picture on a Wednesday in September. And then, the serious ride finally began. The path becomes more technical, you need to pay close attention to what’s in front of your wheel, but also to what you will come across 20m from it, or you might find yourself in a dead end. It’s not about physical effort, its about concentration.

The passage unde Cerdac is both technical and exposed, as you can see in the film – there is a very steep and close wall there, bordering the path. Last summer, during a trip with a large group of Israelis, some of them chose to walk besides the bike on that part of the ride, and I recommend that to anyone who is in the least doubtful about it. In this cases, if you’re afraid, you end up going too slowly, and this means its harder for you to keep your balance, and so you’re chances of fallings start to increase, and if you go down, then there’s hardly no stopping. I do not wish to promote speed, I’m usually more fearful rather then too bold, but most of the times I fell off the bike, it was because I had over braked, or I had been going too slowly. And you can see some of that in the video below.

A bunch of tourists made this section even more interesting, by throwing rocks from above to the paths down below. We gave them a piece of our minds on the matter, and I do hope they understood what they did wrong, but I have little hope, since their excuse was “we didn’t throw them, we just let them fall” – clever, very clever indeed.

We reached Omu Peak, and it was more a question of ticking a box, then of biking. The final ascent is incredibly difficult and it finishes with push bike. It’s especially harder, if you’re carrying a backpack, which is unavoidable if you go on a two day trip, as we did. We stopped at the hut and spent an hour idling in the grass, eating some well deserved soups, colas and cookies. We were getting more and more comfortable and lazy when we were interrupted by a group of motor bikers. Yes, you can find them this high up. They make an insufferable noise, break the paths, and pollute the air – welcome to the mountains.

Drumul Granicerilor: six years ago I was on this path on foot, and I was thinking if I could do it on the bike; my answer then was no, as it would be too much push bike to bear. Every year, however, we become more daring. And now, my answer is yes, it’s a really good mountain biking path. It’s for the advanced and you need to be quite rested to face it (it was one of the reasons we had taken the cable car), but it really is worth your while. The photos and video stand witness to it.

We had another push bike session through a very thick juniper tree forest on Batrana, where the path is really not steep at all, but the juniper branches leave you no room for movement. We carried the bikes for about 10 minutes, till we reached the Salvamont refuge on the Batrana Ridge. The solution we opted for was to carry the bikes upright, on their back wheels. If you put the bike on your back, or if you walk by it, you end up getting caught in the junipers. You could carry it above your head, but that’s really hard, and useless in the end, since the trees can reach up to 2 meters sometimes. Finally, we got out of the junipers, carried on up to Strungulita and then down to the Padina Hut, on a much better trail then expected. We had used the path before in the winter, but we were on skis then, so didn’t really now what was lying underneath all that snow.

The next morning we climbed up fairly easily to Strunga Ridge, but that fact that we were rested was important. Also helpful was that we had been on that trail before, on foot, but considering it from a biker’s point of view. There are a few places where the trail is a straight way up, but it is also zigzagged by another path, which is the one to take if you’re on the bike. We did also take a lot of breaks, for filming, so we had enough excuses to get some rest, since it is a serious climb after all. You go from 1,500 meters (Padina Hut) to 1,900 meters (Strunga Ridge) in 4.5 kilometers, on single trail, and a medium inclination of 13%.

The most technical part of the ride, which is where I took two falls, is between Strunga Ridge and the place where the path enters the woods, before Gutanu. Ideally, we would not have had the backpacks on, but you can’t always have everything that you want. The inclination is reasonable, but the trail is really narrow, and there is always some obstacle in your way: sometimes gravel, other times boulders! But you can cycle more then 90% of it, and even more for those who have enough technical abilities or full suspension bikes. You do need to be paying attention at all times where you’re going, which trajectory you take with the bike, ready to jump off it, if things get too serious.

We took the usual route down from Gutanu (more on that here and here). It was like a walk in the park, compared to what we had done before, but it was very much welcome. The trail keeps on the ridge of the forest, bordering on nice little clearings and hayfields, till it almost reaches the national road, at the low end of Simon.

We did not do that many kilometers in these two days: 30 from Sinaia 2,000m to Padina, and another 25 from Padina to Simon. The elevation however is considerable, and the technical level is most definitely an advanced. Including the filming and photographing breaks, we pretty much filled in two days. You could cram both rides into a single one, but it would be a shame. When you finally reach Strunga Ridge, where the trail gets really hard, you would be tired already. And you would also lose the descent to Padina and then the ascent back to Strunga, both of which should not be missed. You could also go directly to Babele, but then you’d miss the section from Sinaia 2,000m to Babele, which makes for a really good warm up before Cerdac and Drumul Granicerilor. But either way, in two days or just one, the ride is amazing.

And here is what we filmed:

The photos below. Happy trails.