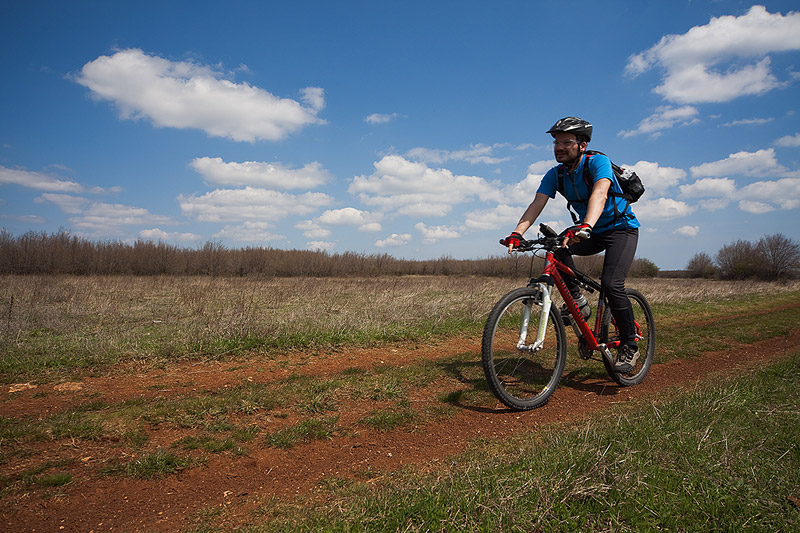 This year, our mountain biking season started in Bulgaria! My parents took us to the Golden Sands for Easter break. And since Horia and I are not very passionate about the all inclusive deal, we decided to break ranks and take the bikes along.

So Horia consulted with his buddy, Google Maps is his name, and drew two tracks through the Golden Sands reservation and the hills surrounding it. We planned to nice little rides, to kick start the season: some 35 km during the first day (with 1,000 m elevation), followed by another 25 km the second day (with 900 m elevation).

The reservation is in fact a lush forest on a big hill crisscrossed by dirt roads and wide paths – how we never met other bikers though there is a wonder to me. I would say they have the perfect cross country terrains, up and down, up an down, while the maximum altitude does not exceed 300 m. I especially liked a red dirt road winding along the ridge of a bare hill, in a truly Mediterranean landscape. Equally charming was an easy descent through the reservation, with pine woods to the left and the Black Sea on the right.

About the all inclusive accommodation, there isn’t much to tell, really. We were expecting worse, in fact. A four star hotel, that looked more like a three star one. Clean enough. OK food. Not very healthy though. I kept away from the fried sausages and opted for cheeses, salads, fish and soup. There was plenty of food, still our fellow Romanians were fighting for it like there was no tomorrow. So we decided to skip lunch and just wander around the Bulgarian hillside. Truth be told, had we not taken the bikes, I don’t know what we would have done with ourselves. It was too cold for the beach. The hotel pool was small and chilly. The place was crowded. The resort rather boring.

On the other hand, I believe that Bulgaria has a lot to offer for the mountain biking crowd. It is accessible, cheap, pretty, the landscape fairly similar to Romania, but not quite – many times you can imagine yourself in Greece or Montenegro. If you manage to find accommodation outside the tedious all inclusive range, I think you will spend a wonderful week of biking, sunning and bathing at the Black Sea.