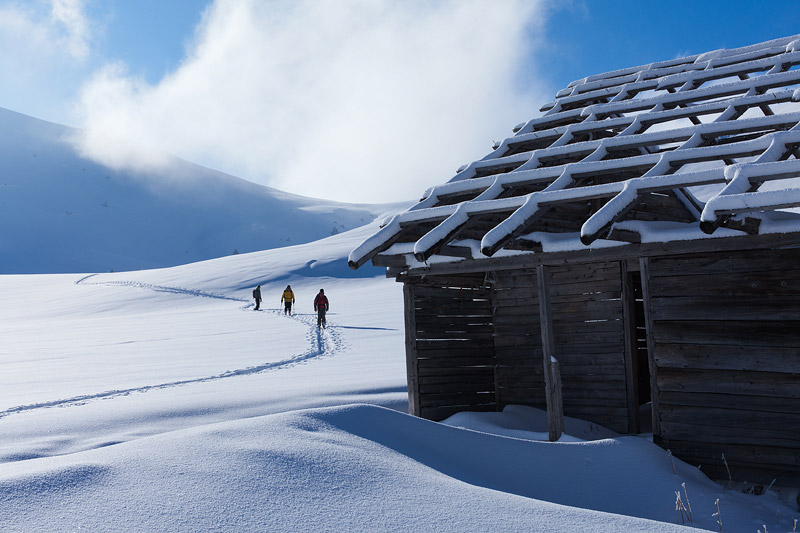 Last year we had poor snow at the end of March, so for 2013 we decided to go to our freeride session with “Les boys” much earlier, at the beginning of February. It was the right decision, we enjoyed some superbe fresh snow.

We drove to Padina on Friday evening, in order to be there Saturday morning ready to hit the slopes and maximize the fun. The weather wasn’t really encouraging in the morning, with pour visibility. But sun broke through at the right moment, just as we were getting up to Tataru pass. We enjoied some runs up there, then some more further down on the way back to the hut, planning to come back in the area on Sunday morning as there were still plenty of untouched powdery slopes waiting to be skied.

We weren’t that lucky next morning, we woke up under some heavy clouds and before we were done with the breakfast snow started to fall – it kept on pouring for the rest of the day. We did our skiing on another area, on a slope bordered by trees so we can cope with the white-out. At noon we were back to base, ready to drive back home.

Many ohters thought they were ready to leave the area on wheels, but the 40cm fresh snow proved to be too much for the small cars. Our old but sturdy Land Rover Discovery was enjoying every minute of the ride and so did Loic while being rope-pulled on his snowboard, but every now and then we had to stop and push up the road or out of the way various motor vehicles unable to cope with the elements.

”Les boys” managed very well this second freeride session in Bucegi, after a less satisfying experience last year. Be it on snowboard or on rented touring skis they enjoyed the fresh snow, the welcoming hosts with gorgeous food and nice storytelling. We had three video cameras but we didn’t bother to find a common filming format, so the final edit is a little bit chaotic – hopefully enjoyable non the less.

Only one regret: we were welcomed on arrival by some marvelous fresh powder but we had to leave behind some even better pow!